FT-1: Moving forward into the past

FT-1: Moving forward into the past

It's not the next Toyota Supra. Or is it? 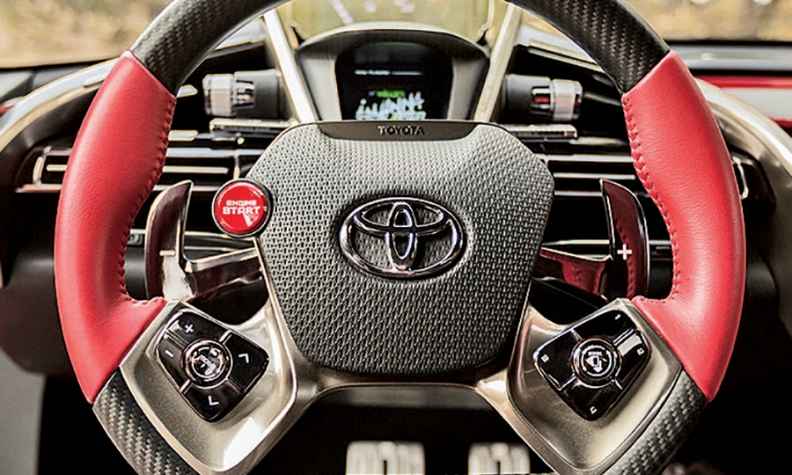 While paying tribute to the history of Toyota sports cars, the Toyota FT-1 concept unveiled at the Detroit auto show wasn't specifically designed to be the next Supra.

Calty Design Research and Toyota Motor Corp. executives went out of their way to avoid using the word "Supra" for fear of giving the concept the aura of an official production sign-off. FT-1 stands for "Future Toyota."

But Toyota has a track record of developing concept cars that find their way to the street.

"We called this design 'Supra' in presentations. There was a big debate over the name. So it's 'FT-1' now," said Calty President Kevin Hunter. "We're not ignoring that we have a history. The name itself is a different matter."

With that in mind, if the FT-1 were to become a production car, viewers should think smaller. To be perceived as a serious sports car on the show floor, the FT-1 had to have stage presence. That meant the concept would be 10 percent larger than what a real-world vehicle would be, Hunter said.

Had Calty done a real-size concept, there was a risk show-goers and the media wouldn't take the smaller vehicle seriously, Hunter said. In other words, people should avoid taking dimensional measurements and calling the FT-1 a grand-touring car.

Calty's starting point was to design a sports car with a theoretical $50,000 to $60,000 price tag, Hunter said. That meant designing something wild, but not so exotic that it pushed the car into the territory that would make it a Lexus.

"We didn't want [Toyota Motor top management] to see this and think it was a $150,000 car," Hunter said. "We also did the Lexus LF-LC [concept coupe] at Calty, so we wanted a different form vocabulary for this car. Anything that looked like the LF-LC was rejected. That car was more touring oriented, while this is a pure sports car."