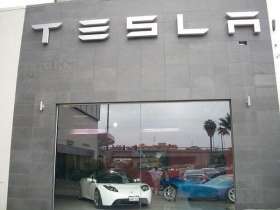 "We are positive on Tesla's fundamental growth story, but are concerned by its valuation," S&P analyst Efraim Levy said in a research note.

"We believe there is execution risk for Tesla as well as opportunity. We expect these volatile shares to be impacted by news flow and investor sentiment shifts," he added.

The S&P rating came a day after Wedbush Securities analyst Craig Irwin raised his rating on Tesla to "outperform" from "neutral" and raised his target share price to $240 from $180. He cited a proprietary survey that supports higher expectations for the company's next generation of smaller, more affordable electric cars, dubbed Gen III.