FRANKFURT -- Tesla CEO Elon Musk sought to allay environmental concerns about the automaker's planned factory in Germany, saying the plant would use less water than was estimated originally. 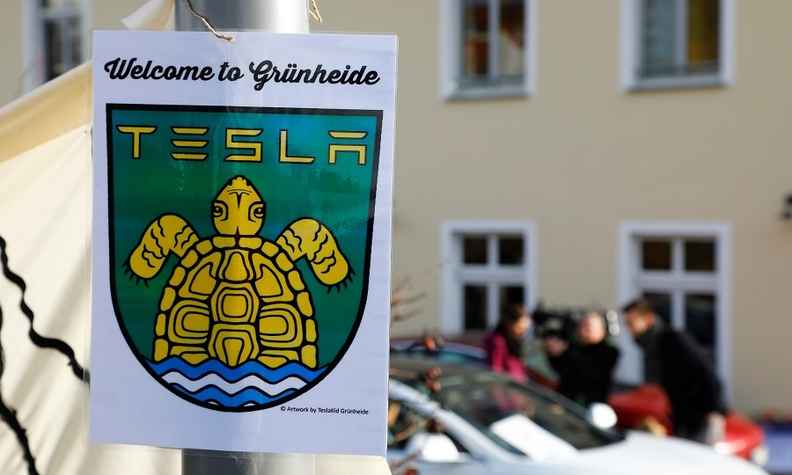 The company had said in planning documents that the factory would need 372 cubic meters of water from the public drinking water network per hour, sparking protests by local residents earlier this month.

"Sounds like we need to clear up a few things! Tesla won't use this much net water on a daily basis. It's possibly a rare peak usage case, but not an everyday event," Musk said on Twitter on Saturday.

The automaker announced plans last November to build its first European car factory in Gruenheide, in the eastern state of Brandenburg in the outskirts of Berlin.

Politicians, unions and industry groups have welcomed the move, saying it will bring jobs to the region, but environmental groups have aired concerns and a Brandenburg water association warned against "extensive and serious problems with the drinking water supply and wastewater disposal" for the proposed factory.

The plant is located in a water conservation zone in a forest bordering a nature preserve.

Musk tweeted that only a small part of the forest on the property that Tesla bought for he plant will be cut to construct the factory. "Also, this is not a natural forest -- it was planted for use as cardboard," he said.

Separately, German business daily Handelsblatt reported on Sunday that Tesla had applied for subsidies for battery cell production and research in Germany.

Over the weekend, Musk cleared a different environmental obstacle: unexploded World War II ordnance, a result of the Berlin area’s legacy as an industrial target for Allied bombers.

Once the area is free of old explosives, harvesters and trucks will roll in to clear thousands of trees in the first stage of development. The work needs to be done by the end of February to meet Tesla’s timetable for starting production in July 2021.

Bloomberg contributed to this report